People movers, or MPVs – as we know them – have been on a roll this past couple of years. Toyota has been the leading the segment with the Innova Crysta with Maruti Suzuki on the second spot with the affordable Ertiga. Kia Carnival, the upcoming luxury MPV will also be a part of the fray by the end of the year. But, let’s leave these cars for a while, shall we? Because today, Mercedes-Benz has launched their luxurious and rather boxy MPV, the V-Class.

Now, this isn’t the first time the German carmaker has tried to get a hand on this segment. In fact, this is MB’s third attempt at MPVs for the Indian market. In 1999, MB launched the MB100 and MB140 minivans, and then again in 2011, they came up with the R-Class. Despite being pretty tough durables, both of them never exactly sufficed the needs of the Indian consumer, be it in a sense of luxury or quality. Today, we have the latest MPV with the three-pointed star insignia, and here’s our Mercedes-Benz V-Class review.

Now it might not be visible in the photos, but the V-Class looks absolutely gigantic, and quite honestly, it looks like a large rectangular box on wheels. It is well over five meters in length and it weighs north of three tonnes! To be honest – if you cover the front – the V-Class looks like an Omni on steroids on Indian roads. The design isn’t much appealing, but the car has massive street presence thanks to the big silhouette and the big Merc insignia – something that adds a sense of luxury in Indian minds.

At the front, the broad nose is complemented by a huge Mercedes logo and a twin-slat chrome grille. You also get a pair of nice LED headlamps and a well-balanced bumper with an added touch of sportiness. The alloy wheels are very plain and the strong shoulder line hides the bulk of this huge minivan very well. In my opinion – and looks are only subjective – the Innova Crysta and the Carnival look much better. 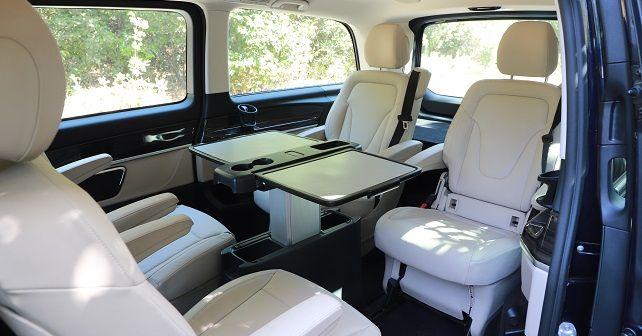 The cabin layout of the V-Class is actually very practical. But first, let’s start with the place the owners are bound to spend most of their time – the back seat. The V-Class comes with an option of two variants – a six-seater version and seven-seater version. In our Mercedes-Benz V-Class review, we got our hands on the six-seater version, the Exclusive trim with the 220d engine.

The six-seat layout includes four rear seats facing each other. The seats can be swiveled by 180 degrees – in case you are not much friendly with the other passengers – for a conventional forward-facing layout. All rear seats are on rails, which means you can easily slide them, fold them and remove them for additional boot space. Between the seats, there is a centerpiece that slides back and forth in the cabin. It can be opened up to reveal two small tables for the very purpose of a makeshift desk. There are rear aircon vents for the passengers and four great quality speakers, which in my opinion, sound extremely well.

At the front, the dashboard layout is a typical Mercedes affair. The cabin is segregated in three different materials – an oak wood finish panel that separates the black and beige dashboard. There is a slick touchscreen unit that takes up the center stage, while it comes loaded with a dash of features, a bigger touchscreen unit would have been a nice addition at this price. The gear lever is very well-positioned and there are plenty of storage spaces in the front as well. 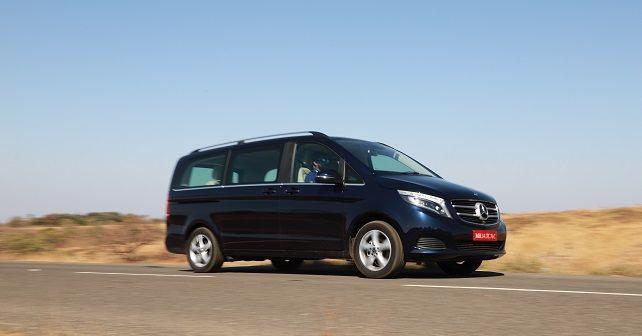 From the driver’s seat!

Honestly, only a mere percentage of owners are bound to spend some time in the driver’s seat. And for those who do, the first impressions of the V-Class seem to be a smooth affair. As soon as start driving, you realize how comfortable and plush the big Mercedes feels on the tarmac – despite its sheer size. The V-Class borrows its electro-mechanical steering from the C-Class. The steering is very direct, and while it’s light to maneuver around the city, it still feels quite responsive.

The brilliant suspension setup works in tandem with the intuitive steering wheel playing a major role in the plush ride quality of the big Merc. The suspension absorbs bumps very nicely and keeps the rear passengers in a harmony despite any road surface. The V-Class gets active dampers, meaning it’s soft when it needs to be and it stiffens up when you are coasting along the highway.

The V-Class is powered by a 2,143cc four-cylinder turbocharged diesel that is capable of churning out 163bhp and 380Nm of torque. As you might have speculated from its on-paper figures, the V-Class is a slow car. Right from the get-go, there is a lot of turbo lag and the car takes its own sweet time to take off from a standstill. Drive it smoothly, and the V-Class rewards you with a smooth and excellent ride quality. 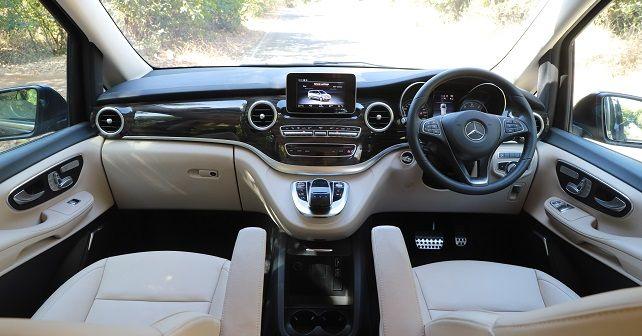 The engine, albeit refined, gets too loud and the diesel clatter seeps inside the cabin once you are in the top-end. But hey, you cannot expect blistering performance from an MPV. That said, the Innova and Carnival – powered by similar-sized engines – feel a lot quicker than the Merc in terms of straight-line acceleration. The V-Class comes mated to a 7-speed gearbox which again – by Mercedes standards – is lazy and quite modest to react. But then again, the gearshifts are smooth and you can always take control of the gearbox through the sweet paddle shifters.

Should you buy it?

For starters, the V-Class has no direct competition in the Indian market. And while the competitors retail at less than half the price, they also perform very well. The Carnival – which will be launched by the end of this year – has the most powerful engine in the segment, and it will supposedly retail at half the price of the Merc. Then there’s the Innova Crysta, and for one-third of a price, it’s actually a steal. So, what works in favor of the Merc? Well, if you want to move people in style and utmost luxury, then the V-Class is your perfect companion – provided you can shell out an enormous amount of cash. To read our full Mercedes-Benz V-Class review, be sure to visit us at autoX.

Things to consider while starting your freelance career

Things to consider while starting your freelance career